We offer this fantastic Autobianchi 500 Giardiniera for sale!

The car, born in 1971, had 2 previous owners, father and son. The first, a man from Catanzaro (Calabria), bought it new as a second car.

Time passed, and the family garage grew with more modern cars, so this car was almost never used, but stored in the dry and warm South of Italy. After being parked for a long time, the owner began to restore it in 2016, then he had to stop due to illness, and disappeared a few months later. After about 2 years his son took his place, taking care of the works.

After the restoration the car was kept in the garage and used for some Fiat meetings, until last July, when he decided to sell it.

Photos of the bodywork are available. The car is in excellent condition and perfectly running. The color and the engine are original, as are the plates and the booklet.

As shown in the images there are 2 holes left for the side mirrors, on both doors, to adapt different mirrors if required, which are now closed with special clips.

The last service was carried out 1 month ago. Complete service with replacement of gaskets, oil, filters, gearbox and engine oil seals, carburetor overhaul and general tuning. In addition to the complete overhaul of the electrical system. The tires are also new.

A family car that represents the history of Italy .. today a collector's item! 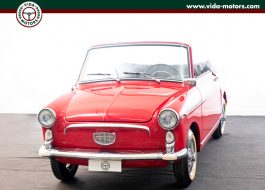